Sometimes you hear people talk about old, steel framed bicycles as being "lugged and brazed" or "fillet brazed". What is that? 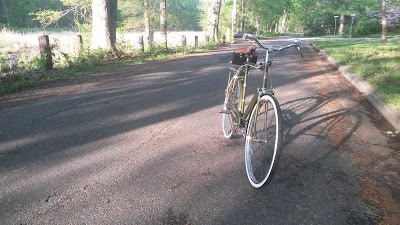 Start by remembering that the bicycle frame begins as a bunch of metal tubes. Let's say like most old bikes, we have steel tubes for a frame. This 1970-ish Raleigh Sprite has plain steel tubes. They're not any kind of exotic alloy or exotic shape - just steel tubes.


You need some way of joining the steel tubes, so you have a couple choices - you could melt the steel itself where tubes come together (welding). Why not just do this? Well, many cheap steel department store bikes today do that. Older balloon tire bicycles did that too - they were not concerned about weight. Many basic Schwinn bikes did a special form of welding up through the early 1980s.

The problem with welding is that, for many years, it required tubes with relatively thick, heavy walls. With a nice bicycle, you want to keep the strength high while lowering the weight. Welding makes a strong frame, but you're giving up some lightness. 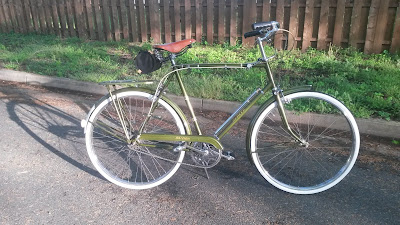 Another option is "brazing" the steel frame. Brazing is to take another metal, generally an alloy with a lower melting point than steel, and to join the steel tubes by melting this other metal and using it as a sort of "glue". This allows you to use thinner walled steel tubes while still building a sufficiently strong frame.

One way we could accomplishing brazing is by taking a hollow "elbow" of sorts that is bigger than the frame tubes, stick the tubes into the hollow elbow, and braze the whole thing together. When someone talks about an old, "lugged" frame, that's what he or she means. 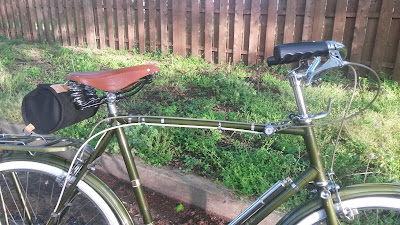 At left you can see a Raleigh frame. The lugs are where the tubes join each other. The lug is an elbow-like sleeve used to join two different tubes. We can get away with the lighter tubing than welding. 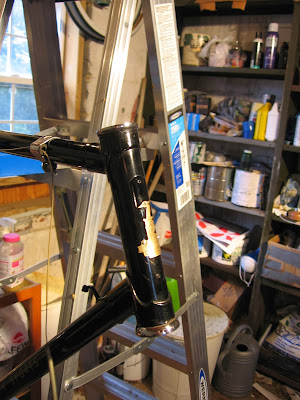 At right, this Raleigh Sports has lugs at each end of the head tube. The sockets allow joining the head tube and the other tubes of the main frame section without having to resort to heavier tube walls and welding.

So do you really need sockets to braze a bicycle together, or is that the only alternative to welding? Well, you could fillet braze the bicycle together. You don't need lugs for that, and you can still use better tubing than heavy, welded steel.

In order to fillet braze you'll again be taking softer alloy with a lower melting point to use as your "glue" for the frame tubes. But this time, you'll be cutting miters or "fish mouths" into the ends of some of your tubes. The result is that the frame actually fits together without any brazing material - and if the frame is good, the fit will be very close. It's sort of like a jig saw puzzle where on tube fits directly onto the next through cut-outs. 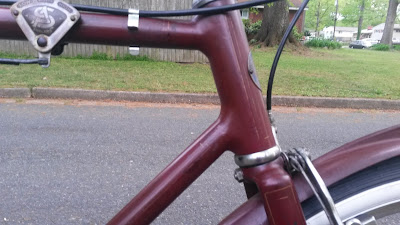 The Schwinn New World at left is fillet brazed. Fish mouths are cut into the top and down tubes. They fit closely to the head tube, the brazing material is melted and worked into the close joint. 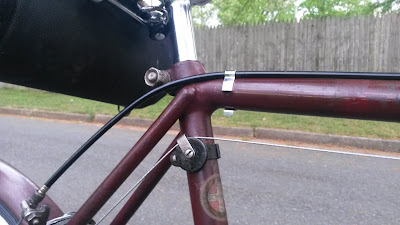 At right is the seat cluster on the same frame. This time, the seat tube is joining a fish-mouthed top tube and brazing worked into the joint. 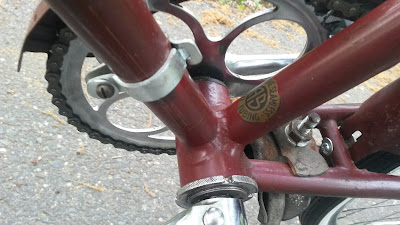 Here's the bottom bracket. That "slag" or "blob" around the joint is the brazing material. The other joints are smoother because these blobs of brazing are filed down to be smoother.


So which is better? I can't say as either one is necessarily better. They just accomplish the same thing in different ways.

In fact, Schwinn's top-of-the line Paramount bikes were lugged rather than fillet brazed. But there are plenty of examples of well-made fillet brazed Schwinns and other bikes that survive to this day.

My suggestion is to try both, and perhaps own an example or two of both types of construction. They can each be very attractive and a lot of fun to ride.
Posted by The Bike Shed at 6:52 PM