I periodically clean up and do small upgrades on bicycles I've already "completed". This weekend I replaced the plastic zip ties securing the wire for the light set on my 1974 Raleigh with homemade metal clamps. I made the clamps from sheet aluminum using tin snips, a grinding wheel, and a drill. 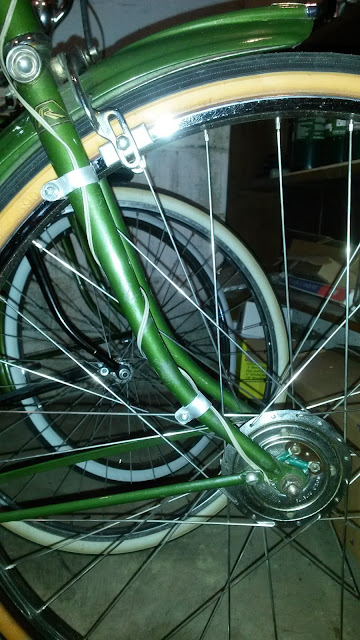 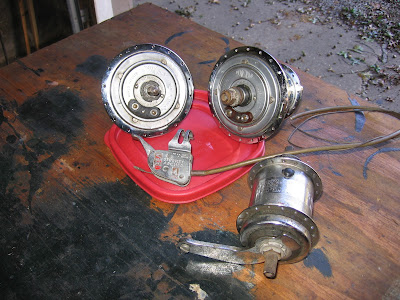 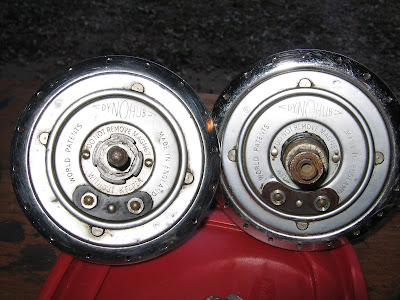 Along with the hubs, I picked up a somewhat uncommon Sturmey Archer "4" Speed shifter with silver face and brown paint. These are not truly rare, but you don't see very many come up here in the USA. It's much more common to see the "3 or 4 Speed" shifter faceplate than just the 4 speed with window. 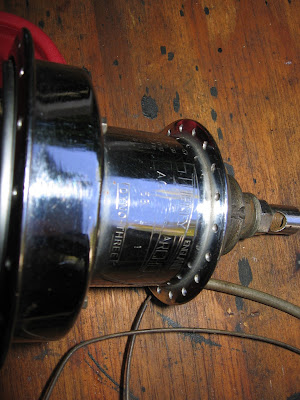 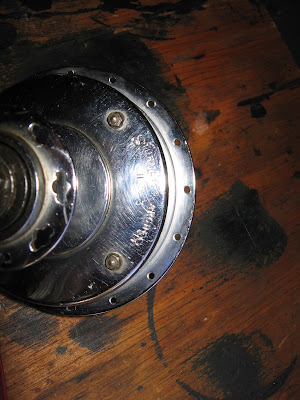 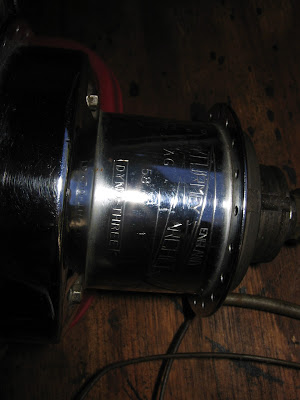 I cleaned a little of the red house paint off of the shifter and put it straight on my 1958 Raleigh 4 speed Sports. 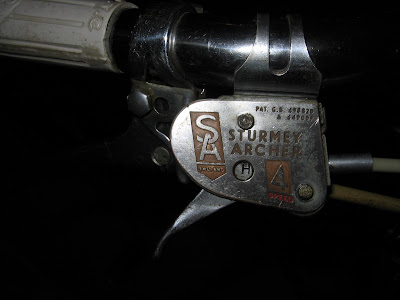 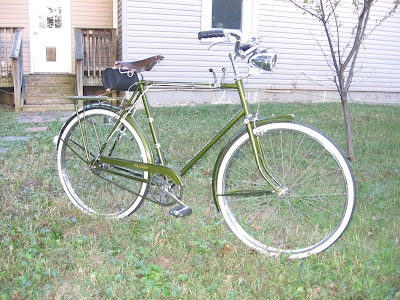 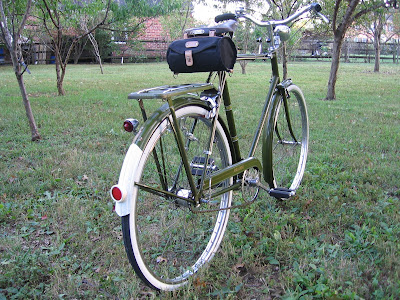 And here are a few better shots of the now-assembled Raleigh Sprite with Sturmey Archer S5 hub. The bronze green on this bike is particularly nice and has a lot of "shine" to it, at least compared to some of the later 1970s bikes I have seen. 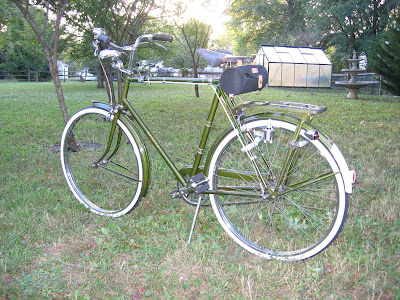 I am debating whether to add frame pump clamps and a frame pump. I have a short Zefal pump here at the shed, and another, more authentic one on the way. We'll see where it goes, but I may leave it as it is now. It's an interesting, "gadget" bike compared to an AW or even an FW Sports. 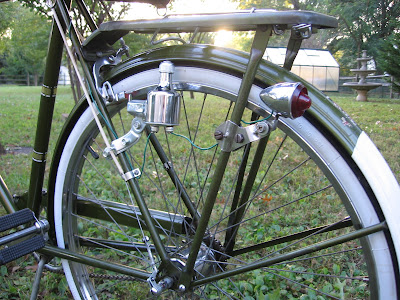 This one is definitely a "busier" bike to ride, with dual stick shift, hand brakes, bell, rear "bottle" generator, and dual-beam front light. There's a whole lot going on with this one. 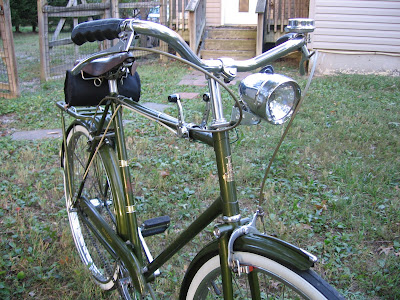 The white wall tires are not entirely my idea. I was inspired by the late 1960s-era Sprites in the U.S. Raleigh catalogs, which had white wall tires. I wanted a "classic" late 1960s-type Sprite look, and I think this one does nicely. 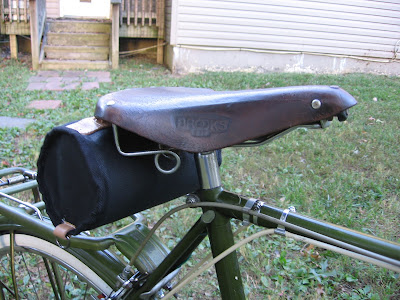 It looks to have the original B72 saddle still, which looks great on this bike. Proofhide really brought out the deep brown of this saddle. The bag is a Banjo Brothers Barrel Bag. This bike has the classic, Prestube Minor matching rack.
Posted by The Bike Shed at 8:10 PM

With a rainy weekend and cooler weather closing in, I worked overtime on the Raleigh Sprite 5 speed project this weekend. It is 95% done. The remaining 5% is to clean up a set of frame air pump clamps and mount a frame air pump on the bike. 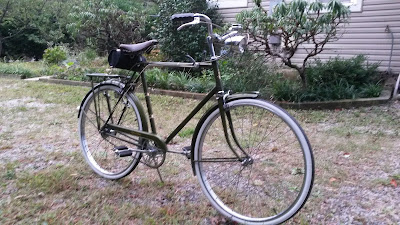 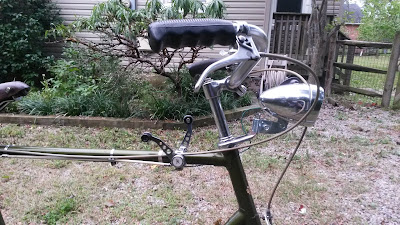 The bike has two "muscle car" style tall sticks to operate the 5 speed hub. This is a pretty cool feature of this particular Sprite. 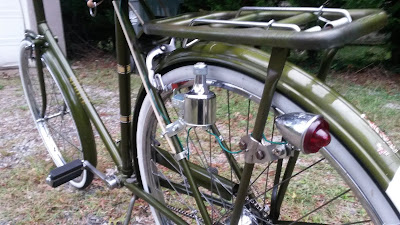 I also equipped the bike with a custom electrical system. I used a new 12v/6w tire generator and headlamp, but re-used an old miller bracket and tail light I had around. I put an appropriately rated tail light bulb in the tail lamp. 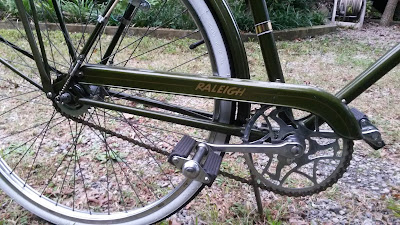 The tires are Duro white walls. The 1967 Raleigh catalog shows a Sprite with white wall tires and I took my cue from that. 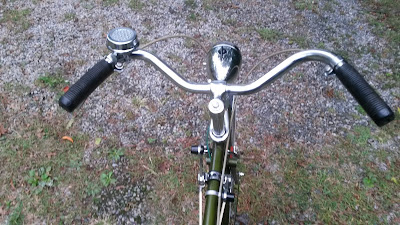 I will get better pictures once I have the pump on and have a bit more sunlight. 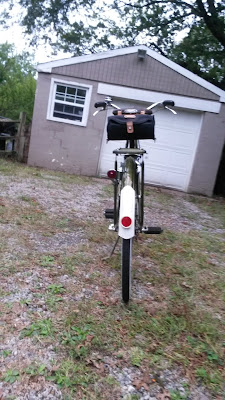 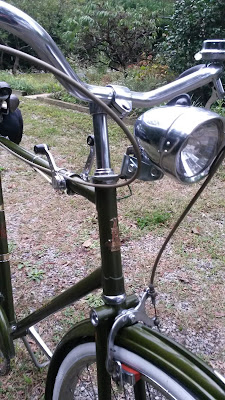 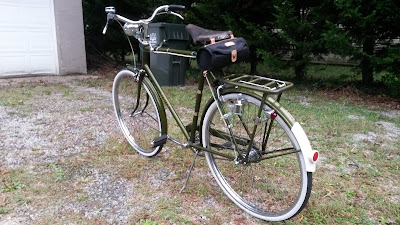