With particularly hot weather, the best thing you can do is to wait until evening to ride. Tonight I got started about 5:30 and went for a little over an hour. It was actually a good ride at a steady pace. It certainly was hot, but by 6 in the evening, the worst of the heat is mostly over. This Sports Roadster is a great bike and example of how simplicity can be an asset in a bicycle. 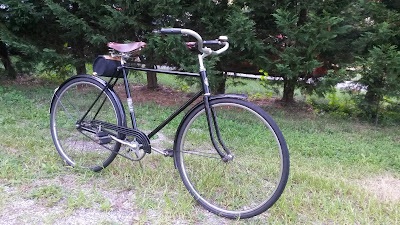 Here's what is next on the list- a 1938 Cleveland Welding Cadillac bicycle. This is the "double bar roadster" style frame. As balloon tire bicycles go, it is pretty basic. I like the simplicity and flow of this design. Many balloon tire bike frame designs look weird or incomplete without a tank, but this one captures a good balance of stream lining, but simplicity. The bike is complete but needs some cleaning. 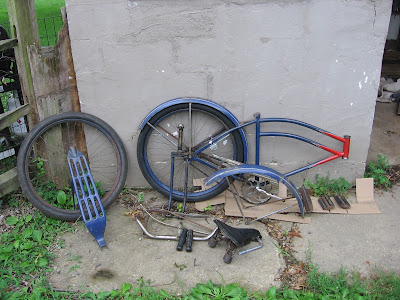 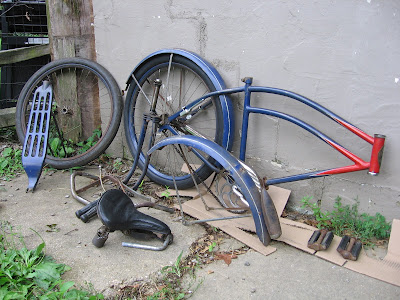 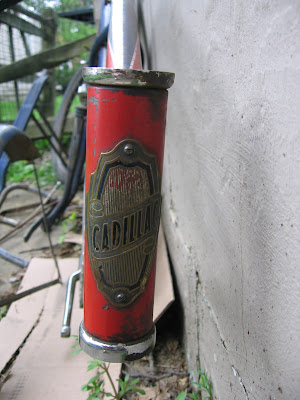 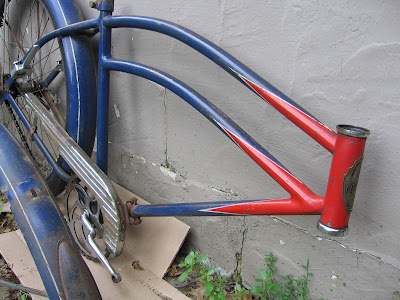 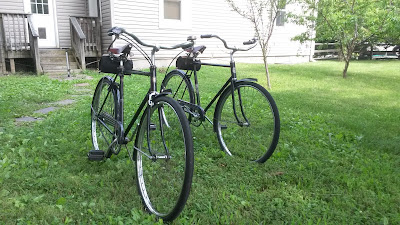 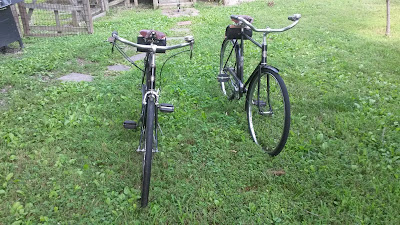 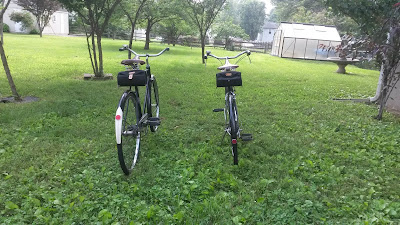 This covers the generation of diamond frame (and traditional ladies step over frames) bicycles that makers like Schwinn and Westfield started building to rehabilitate the adult bicycle market in America.

In the later part of the 19th century, there was a "bicycle boom" in which many adults began riding bicycles for exercise and transportation. In the early 1900s, this market crashed. By the 1930s, most of the American bicycle market was aimed at children and teenagers. In the early 1930s, the children's and teenagers' bicycle market was boosted by the arrival of bicycles using 26 inch "balloon tires" that involved a tire shell and inner tube.

Reviving the American Bicycle for Adults

By the late 1930s, several American bicycle makers began thinking that they could also revive the adult bicycle market in the U.S. if they modernized their offerings for adults. Earlier adult bicycles had usually involved wooden rims and single tube tires, in which the inner tube and tire were a single unit. These bicycles were selling poorly by the 1930s. This led to the creation of such bicycles as the Schwinn Paramount, Schwinn Superior, Schwinn New World, Westfield/Columbia Sports Tourist, and Westfield/Columbia Sports Roadster.  Other makers soon began to produce bicycles, such as Cleveland Welding Company and Manton & Smith. 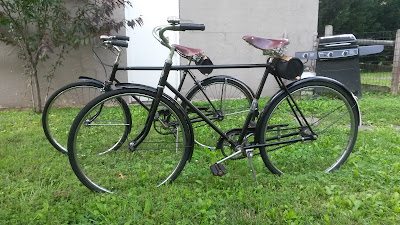 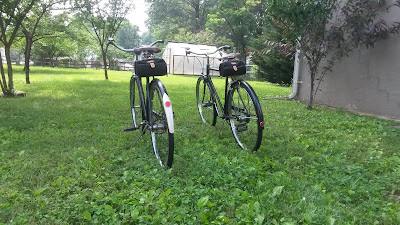 While many of these bicycles look the same, they have some subtle differences. For consideration here are a 1947 Schwinn New World and a 1940 Westfield Sports Roadster. 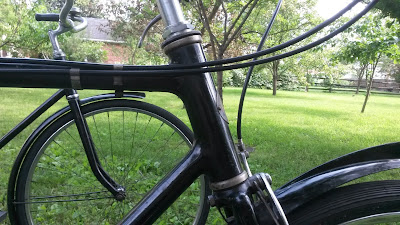 The differences are subtle, but still apparent. The frame on the Westfield is more relaxed, while the Schwinn is a bit closer to an English type light roadster. The Schwinn has hand brakes, while the Westfield has a New Departure coaster. 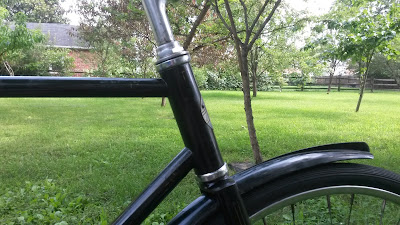 Both of these bicycles represent a unique attempt by American manufacturers to revive adult cycling in America. These builders had visions of Americans taking to the road like the English or French, touring different places on vacation or commuting to work in cities. 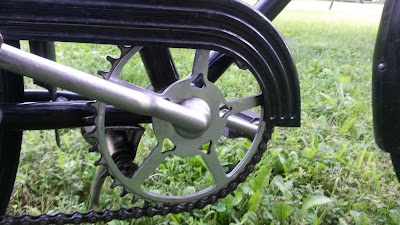 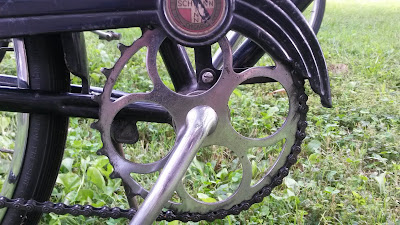 Their attempts were not particularly successful, and a true, new "bike boom" in America would not take place until a generation later.

A few weekend shots of a 1949-50 Columbia Three Star Deluxe and a 1940 Westfield Sports Roadster. American manufacturers indeed were known more for their "heavy weight" balloon tire bikes, but they also made some very interesting light roadsters that hybridized American and English technology. 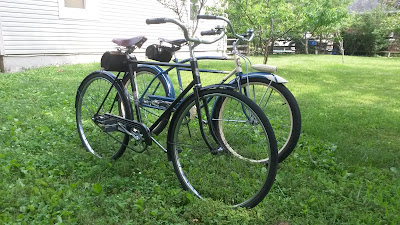 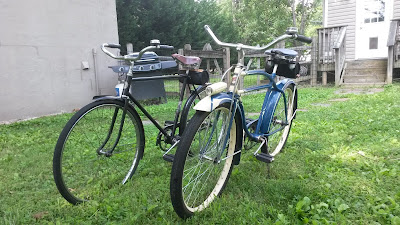 The balloon tire bike is certainly more ornate, and was made to appeal to a teenager or younger adult, while the Sports Roadster was a more utilitarian cycle for transportation or exercise for a college student or an adult. 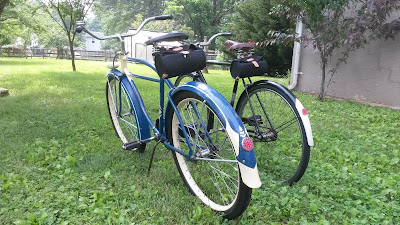 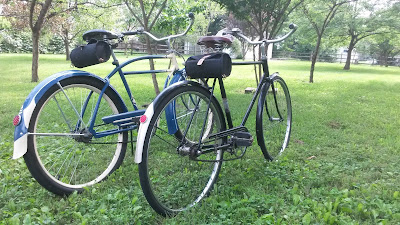 The Columbia has the cushier ride with the longer wheel base, while the Sports Roadster is the more responsive and faster accelerating bicycle. Nothing particularly surprising there.


They each offer a different ride and each has its place in any bicycle collection where riding and function are key. 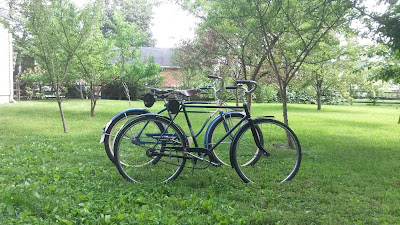 I think that you need to take advantage of any decent weather for riding during the summer. Here in Virginia, it becomes very humid and more evenings than not, there is a real chance of thunderstorms. The past couple of weeks have been exactly that way- warm and humid with thunderstorms int he evening. I've been able to get rides in about 60% of the time, which is good. The days are long this time of year, and you don't have to worry about riding in heavy jackets. 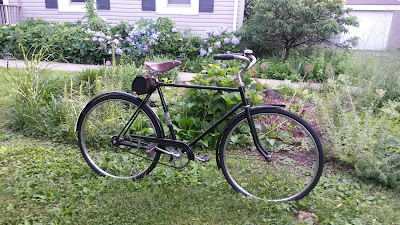 The 1940 Westfield Sports Roadster is an outstanding bicycle. It's somewhat basic and in some ways primitive, but it's fun to ride. The fun comes from the simplicity. The bike is reasonably light and very docile in handling. 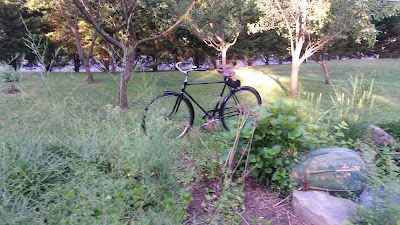 Pretty much anyone could ride this bike hands off without difficulty. I'm really enjoying this one. It's a great, American bike for Fourth of July weekend.