Here are the fenders from the current 1965 Raleigh Dawn Roadster project again. Previously, I shaped their bottom tips using a Dremel tool and sandpaper. This time, I will be removing rust from parts of the fenders.

If you read about the Columbia DeLuxe project earlier (blue bike in earlier posts), you saw that I cleaned rust from the fenders by dunking them in a large container of Oxalic Acid. The condition of the Columbia fenders was such that an Oxalic bath was best. The paint was badly peppered with rust, so any potential dulling was worth removing all those little spots.

This time around, the paint on the fenders isn't that bad. In fact, much of the rust is limited to certain areas and is not widely peppered the way the blue fenders were. Moreover, the paint that remains is pretty glossy and nice still.

You don't have to dunk the entire fender to clean the rust off. You can use a hybrid method mixing mechanical and chemical methods. 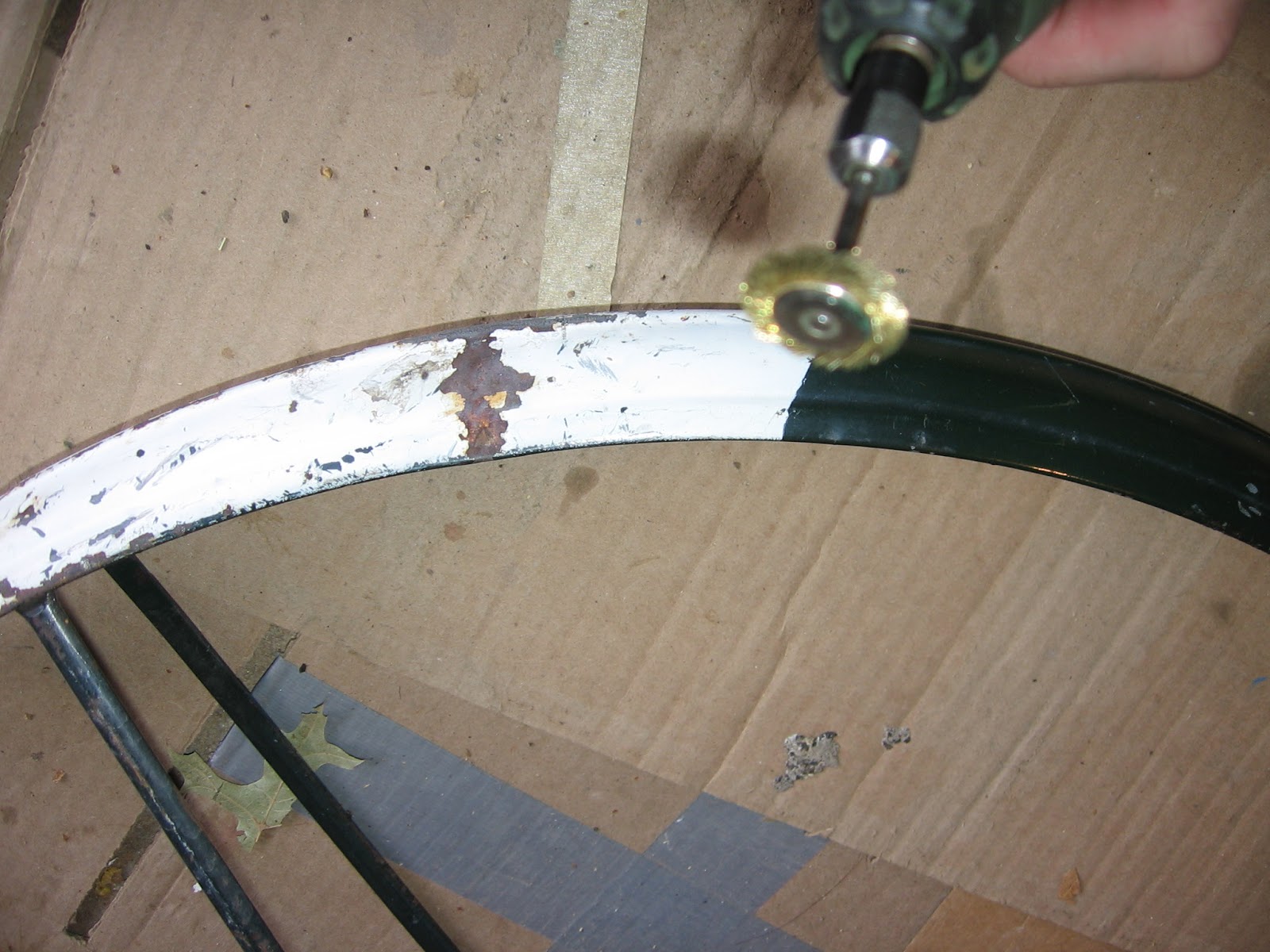 I have chosen to use a Dremel with a soft bristle brush. This brush is a brass one. The brass is harder than the rust but soft than the solid steel underneath. That means it will remove the rust but won't chew up the good steel. I set the Dremel to medium-low speed and begin to work. 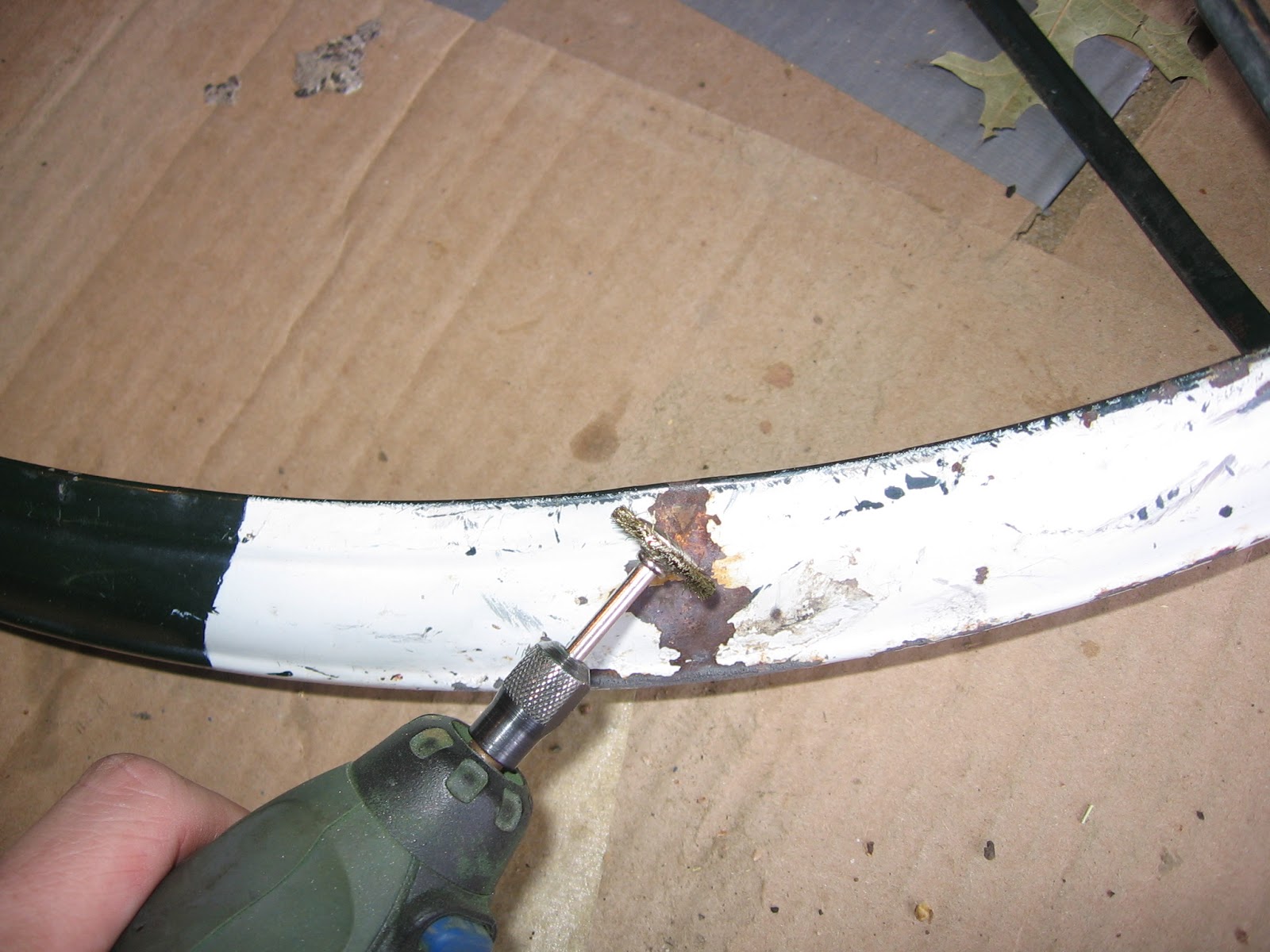 I hit the bare and rusty parts first. Sometimes around the rust you see "bubbled" paint. This means there is rust underneath the paint inside the visible bubble. I hit those too, and sure enough the paint flakes right off because it has been compromised by underlying rust. The spots where I use the Dremel will later be filled with matching paint. I then take a rag and rub the dust off to check my work. 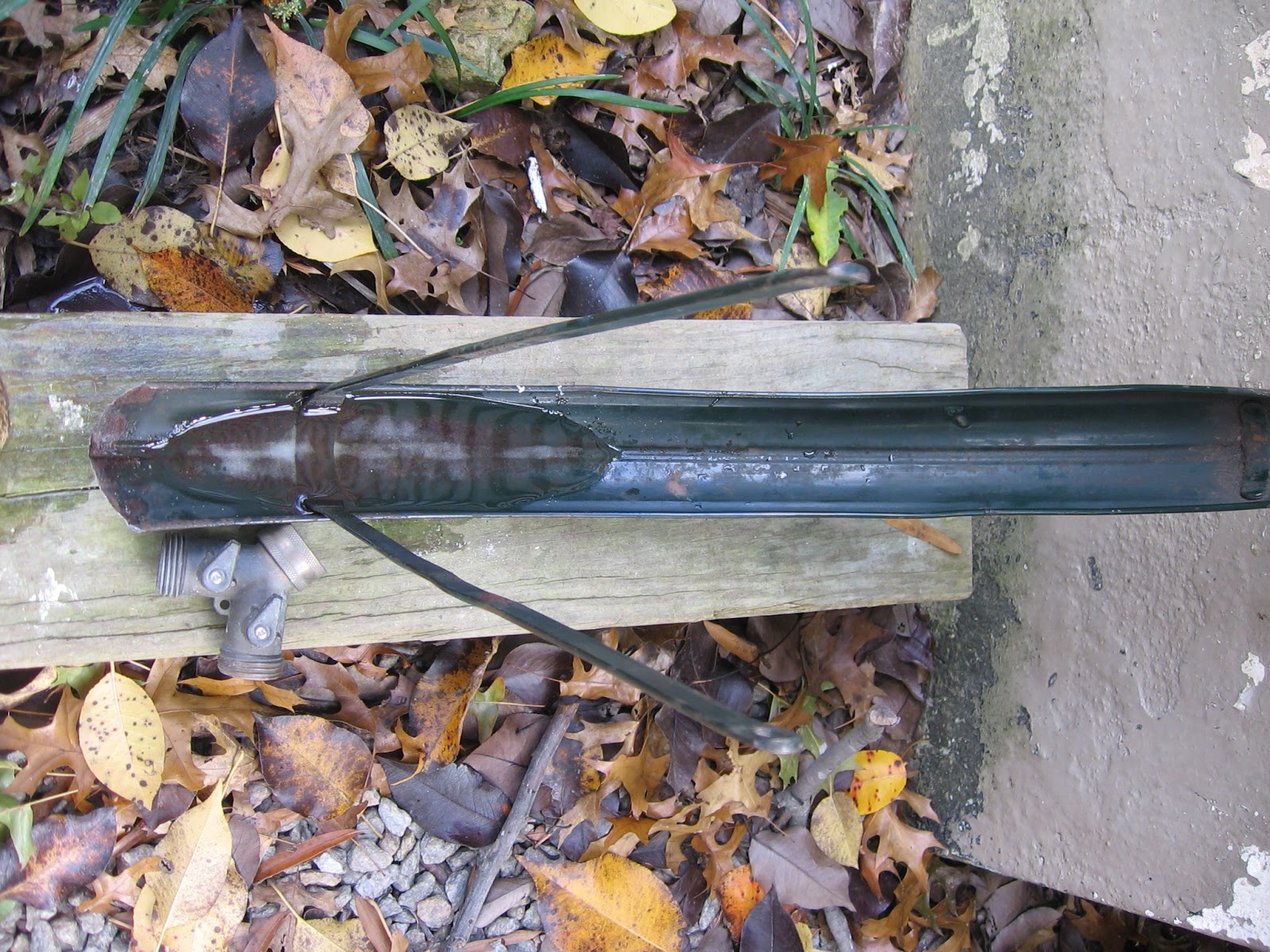 Now the inside of the fender is somewhat worse. Second, the inside is much less visible than the outside. This means I can use an Oxalic pool. Rather than dipping the entire fender, I prop it up until the Oxalic bath water sits in it over the rusty areas. You can modify the position of the fender to hit different areas of the inside well. Moreover, it can get into places where the Dremel cannot reach. Even if it dulls the paint a bit, that area is not really seen because it goes up against the wheel. If you're doing a show bike, this may not be the best method. But, if you're doing a rider restoration, this can work nicely. After a couple of hours of checking, the rust in that area is gone and I rinse the solution out with tap water, then rub dry. The bare areas will also be filled later with matching paint.

So there it is: the outside parts have ok paint that is still glossy, and the Dremel can reach the rust. So I use that on the outside. On the inside, the paint shine is somewhat less important and the areas are harder to reach, so I use an Oxalic pool method. I never did a full dunk, yet I used a couple of approaches to remove rust, depending on the needs of each area of the fenders.