Electroforged Schwinn bicycles require a unique seat post, sized 13/16" to fit the seat tube. These frame tubes are small and have thicker walls than many other bicycles, and certainly compared to modern bikes. So a thinner seat post is in order.

One of the other issues is that most of the old, electroforged Schwinn bikes take a smaller seat clamp size than a standard 7/8" clamp. The result is that if you have old Schwinn 3-speed, there's a good chance you'll need some kind of seat post adaptation if you want to use a standard saddle clamp, something akin to what you'd find on a Brooks B66. 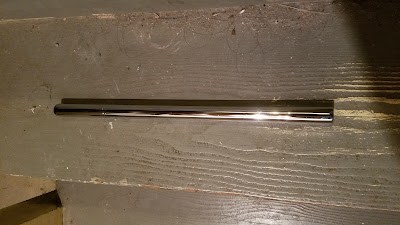 A heavy-duty solution is the Porkchop BMX Cr-Mo seat post, running 13/16" in the frame and 7/8" at the seat clamp. This post is over 14 inches long, because it is made for BMX bikes, which tend to have shorter frames. Given the longer length and heavier construction than some of the less-expensive options (for example, Wald post), this is a good choice for the person who needs to extend the seat post a bit, but wants to use a standard 7/8" saddle. 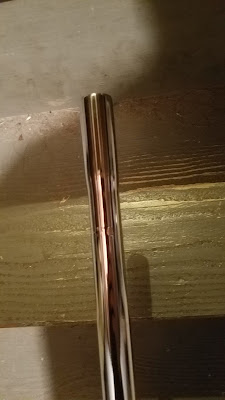 I am using one of these Porkchop BMX seat posts on my electroforged Schwinn Superior from 1950. The seat post lacks a safety ridge, so I advise using a saddle clamp with a safety "notch" in it to make sure the saddle doesn't try to slide down the post.  This seat post seems to go in and out of stock, so keep periodically checking Porkchop's website if it goes out of stock. This is a nice option if you want a heavier duty seat post in the size of the common Schwinn 3-speed. The extended length also gives you the option of setting it to the height of your liking. 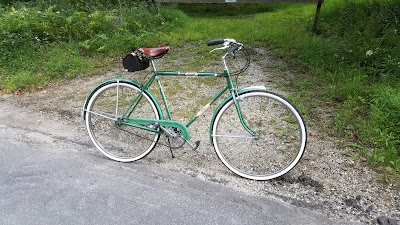 A second option, is the common Wald brand seat post, against 13/16 to 7/8. The Wald is a flimsier post, though it does indeed have a safety ridge. The Wald is OK if you are an average or light weight rider and you will not be extending the post very much out of the seat tube. But for a heavier rider, or someone with more than an inch or two of extension, you may want a heavier seat post. I've seen the Wald posts bend, usually from a heavier rider on a seat post extended far out of the seat tube.

I use a Wald on my 1960s Schwinn Racer, which is a tall frame model and has very little extension of the seat post. 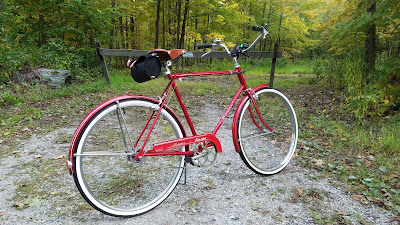 When you're riding in the spring or fall, with days ending sooner, it's important to remember that you should equip your lights to deal with the darkest areas of your ride. In my case, I ride in a mixture of open areas and wooded roads. So I gear my lighting for the wooded areas - it's better to have extra light in the open areas than not enough in the woods.

In the case of this 1949/50 Schwinn Superior, I'm using a removable LED light with a rechargeable battery strapped to the handlebars. This set up provides a good headlight with three beam levels, and all without modifying the bicycle in any permanent way. The silver-colored casing of the headlight also goes well with a vintage bicycle. 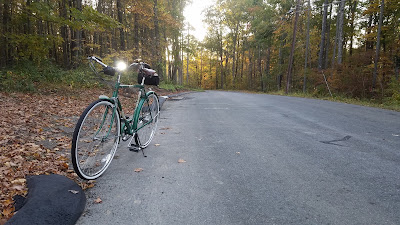 The rear light is a small, square red LED. This one recharges with a USB cord, offers two beams, and two types of hazard flashers. It clips right to my saddle bag, again meaning no modification to the bicycle. 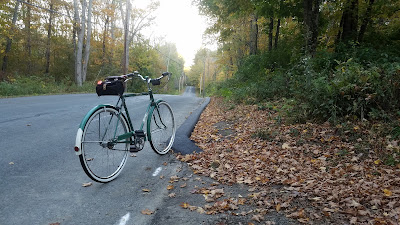 The autumn colors are very nice, and it's good to enjoy them by bicycle. Just remember to bring a good set of lights, light-colored clothing, and whatever else you think might be helpful in your particular area. These warm, fall days are not to be missed, so make the most of them. 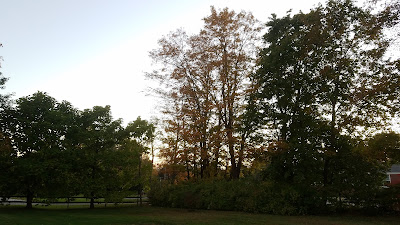 Posted by The Bike Shed at 7:56 PM No comments:

I have had, for a couple of years now, a 1951 Raleigh Clubman  that was re-painted a very nice, graphite or metallic grey color. This was done by a professional or a skilled hobbyist because the paint is very smooth and uniform. The bike has Bluemels alluminum fenders, an aluminum stem, and Raleigh steel all-rounder bars. The brakes are GB Sprite alloy sidepulls. 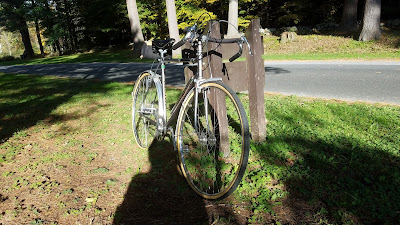 This bike came to me with blue vinyl pinstripes, which were nice, but I recently began fooling somewhat with reproduction decals. I did a waterslide  seat tube decal on a 1960s Schwinn Racer that came out very nicely and was a great match for the original, thin graphics on the Schwinn.

So I figured I would try some new graphics on the Clubman. I ordered a couple sets from a bicycle graphic company in England. This included the Raleigh Clubman set, plus Heron transfers for the fork, and a Reynolds 531 transfer for the seat tube. I also got a "Made in England" transfer.

All of these transfers were of the "sticky" vinyl type and not the thin, waterslide type as I had with the Schwinn (the supplier of the Schwinn transfer was in the US and a totally different business).

These vinyl decals were not as easy to work with as I had hoped. The instructions say to wet the surface a bit, but wet versus dry did not make a huge difference as I experimented. Maybe I did not use enough water, but the decals were very sticky and really wanted to adhere to the surface. 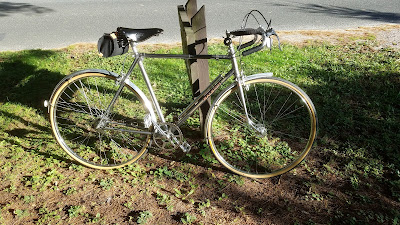 After a fair bit of fooling around, and resorting to a couple of the backup decals I bought, I got a satisfactory result. These decals are heavier duty than the really cheap ones, though I will admit they don't have the subtle edge of a waterslide decals. They sit a little higher than the originals would. The colors are quite nice and they improve the bike. 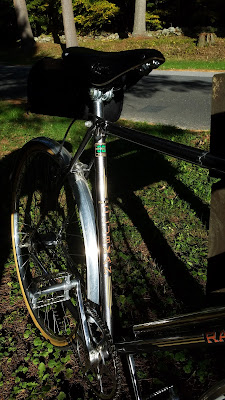 My recommendation is that if you are going to do replacement decals or new decals, go for something that is similar to what you would have originally had on the bike, so that the sizes and shapes match. Don't go with a cheap decal set from the far east. Instead, stick with cycle-dedicated suppliers in the US or Britain. Don't be afraid of good quality waterslide decals - follow the directions and they mount pretty easily. With the vinyl decals, be very careful how you mount them and measure twice before trying to mount because they will want to really stick down once you stick them. You may want to buy back ups in case you mess up and have to fix something as well.

Posted by The Bike Shed at 3:24 PM No comments: